We often get asked about Horizon 2020 success rates and distribution of funding. Here we will briefly summarize some of the information which you can find in the Horizon 2020 Monitoring Report 2015.

The European Commission’s Directorate-General for Research and Innovation  published in late November 2016 the second monitoring report on the activities, results and impacts of the Horizon 2020 funding programme.

The Monitoring Report provides an assessment of the calls closed in 2015 along with the updated data for 2014 calls, as well as aggregation for both years. The study underlines the most important issues related to performance as measured by the key performance indicators, implementation aspects and participation trends.

eligible proposals were received in the first two years of Horizon 2020.

was the highest success rate for proposals in societal challenges in 2014 and 2015 (smart, green and integrated transport)

more should have been budgeted if all High Quality Proposals were to be funded in 2014 and 2015.

of the funding was allocated in the Societal Challenges pillar in 2014 and 2015.

Table 4 below shows overall success rates and shows that the success rate in terms of number of eligible proposals was 10.7% in 2015; in terms of EU financial contribution requested, it was 10.9%; in terms of number of applications, it was 11.2%. Compared to 2014 this constitutes a decrease of 2.5 percentage points in the success rate of eligible proposals, of 3.3 percentage points in EU financial contribution and of 4.2 percentage points in number of applications. The total success rate in Horizon 2020 for 2014 and 2015 is 11.8% for eligible proposals and 12.3% for EU financial contribution. Looking at the share of the proposals scoring above threshold, also called High Quality Proposals, a total of 22.7% of these were retained for funding in 2015. This constitutes a significant decrease of 8.8 percentages points compared to 2014. In total for Horizon 2020 about one in four High Quality Proposals submitted was selected for funding. In total, 25 116 High Quality Proposals in the first two years of Horizon 2020 were not funded. 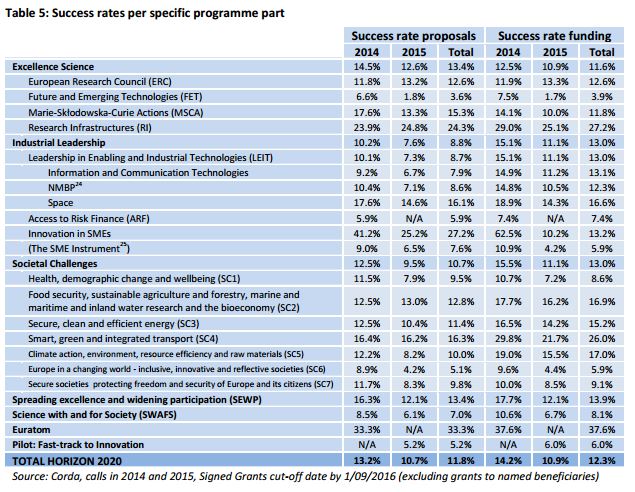 Horizon 2020 is competitive but offers great opportunity for research funding. Halbert Research provides proposal evaluation services which can help you in preparing a competitive proposal, find out more here.

We use cookies on our website to give you the most relevant experience by remembering your preferences and repeat visits. By clicking “Accept”, you consent to the use of ALL the cookies.
Cookie settingsACCEPT
Manage consent

This website uses cookies to improve your experience while you navigate through the website. Out of these, the cookies that are categorized as necessary are stored on your browser as they are essential for the working of basic functionalities of the website. We also use third-party cookies that help us analyze and understand how you use this website. These cookies will be stored in your browser only with your consent. You also have the option to opt-out of these cookies. But opting out of some of these cookies may affect your browsing experience.
Necessary Always Enabled

Any cookies that may not be particularly necessary for the website to function and is used specifically to collect user personal data via analytics, ads, other embedded contents are termed as non-necessary cookies. It is mandatory to procure user consent prior to running these cookies on your website.

SAVE & ACCEPT
Go to Top